I didn’t know if or how to go about this one, because lots of people do these things, but maybe someone might relate to how it started.

Nausea and other worries about my gut, like fear of not having a washroom nearby.

Just that. Somehow back in mid 2015 it got to the point that food would make me feel just gross the entire day and the absolute worst was when I tried anti-anxiety medication that “may cause nausea”, so therefore for me, laid me out so bad that I didn’t want to move. I didn’t want to anything.

That’s really where I just got angry. No other way to describe it. Thank God by that point I was self employed so I didn’t have to specifically worry about rushing off to work (somehow). This isn’t an ad but I started using that calm app for meditation, which got me to focus on my breathing and this method actually helped me through gigs because of course I was still doing professional shows with the band (one show in October 2015 was probably the closest I came to walking off stage as I felt too gross).

Anyways, other than the smoking which I was worried I needed to combat sleep and constipation, I started on diet and exercise. First thing I did was I just walked straight out despite my body wanting me to not do that. I was over 220 lbs somewhere and was supposed to be creative and here I was finally doing things and being shut down by my own body. I wasn’t having that so I did the longest walk I could think of which was around the waterfront in Victoria. 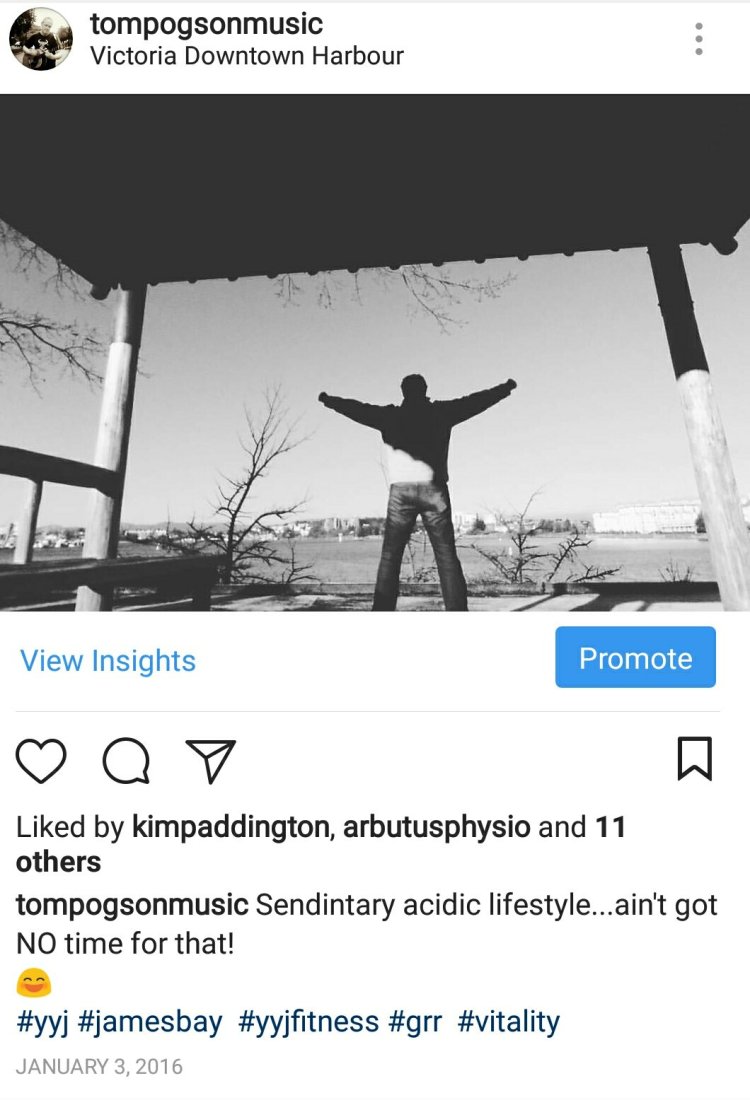 I started with walking everyday, meditation and, from researching things, tried to eat more alkaline food. I’m not rich so going full Mediterranean Diet is nice but impossible. One thing I did add was my oatmeal thing which was steel cut oats, a healthy “breakfast topping” of cacao and other things in a mix, lightly over that and blueberries. Drank lots of water, drank Ginger Tea with fennel and listened to (I know he’s upopular now-I was annoyed too) all the Tony Robbins stuff I could find. There was a thing on “Body You Deserve” that mentioned a walking – running – walking 30 min pattern, which I got a heart rate monitor for, because on a doctor’s advice I was going to try and bring my weight down. I was never big, until my thirties where my metabolism cut out so much that in a band photo it looked like I was standing closest to the camera.

So everyday I was running after 10 minutes of walking, trying to stay in my target range. I was scared to let one day go. Eventually I got my first gym membership and started a Good Life Fit Fix program, which is essentially working on each machine to failure after a short treadmill warmup.

When I went back to work my walking went way up (work as a cleaner again) so I do the gym and running three times a week.

Things improved and my weight came down but it still wasn’t as good as I wanted and only one thing was left.

I quit smoking in November of 2017. I used the gum as I was scared I wouldn’t sleep and once I got past day three or so, I wouldn’t say it got easy, because that took a while, but it got more important to keep going…like I had never made it that far.

I’m still fighting my problems and everything but at last count I’m below 190 lbs and haven’t had a show as bad as back then. These days I’ve been doing running where it’s part cardio as well and over 35 minutes and I’m enjoying challenging myself with ones like running the entire inner harbour from Fisherman’s Wharf to the Esquimalt Westsong Trail entrance, which less than two years ago I couldn’t even walk.

Today’s music was Anastasis by Dead Can Dance, which I discovered while writing and, being a baritone, I like trying to sing to, lol! Not now of course, it’s early. 😂