It took me a bit to come up with an unconventional love for today’s prompt after going through the discussion about love a few days back.  Love for people and pets is considered understandable fair game that no one would question you for and so anything outside that box is naturally going to seem strange.  There was the runner up of the characters I create but as someone who is putting them self out there as a writer that seemed a bit cheesy.  But at the same time so does this as a musician.  I can only suppose that cheese is inherant within this subject.  As a barista a love of coffee…same.  As a man love of women…I probably should just leave that one alone.  You get the idea.

So I chose headphones.  It’s not naughty by any stretch of the imagination.   And no, I’ve never walked around listening to naughty noises.  Though I could see the surreal quality of listening to amore secretly while taking public transport to return bottles.  I think it would get old fast and I would probably prefer podcasts or music in its place.

But with that extreme concept aside it does show the reason I enjoy them so much.  Within those speakers you have total freedom to create a world of enjoyment that is tailored to what you want.  It’s a wonderful chance to explore something new while you are already in transit, feel the comfort of something heard before, or stay dialed in with local radio.  I know when I use to do Janitorial my connection to local talk radio made every bit of difference as I didn’t feel quite as disconnected to the rest of the world.  These recent ones are Bluetooth so I can also make phone calls from them, though this isn’t always best as you do get to look a bit strange talking like that, but people can suppose it is Bluetooth.  I have also used my headphones as I mentioned before to “test drive” music I have created, taking it out of the home studio context and setting it against the world outside.  As a cleaner I have also spent loads of time with, well, what use to be books on tape but is now podcasts, downloads and things that end with “this is Audible.”

You can use them before work like audio caffeine to get you going. You can switch to a soft playlist to slow things down again.  Another unconventional love I nearly used was that of public transport actually because when you get a decent spot (which is what failed this title as it is not always possible) you can use headphones to create a insular world of quiet ambience and with another honorable mention, my 300 page notebooks, you can use this world to create while you are already on the go.  I created not only ideas this way but entire characters have come from these moments in the back of a low floor double decker passing Uptown on the way to Craigflower and Tillicum where I use to live.  Longer the ride the better.  With headphones on and my Memo app (yet another) I planned my entire last move while supposedly “stuck” on a BC Ferry returning from Christmas holidays.

If you listen to music this way it actually spurs you to discover more music as you naturally want to expand the range of what you hear.  It is where I discovered Karl Pilkington and the Ricky Gervais Show, headphones on, cleaning my way through a newly renovated office.  I also listened in that same place to Sol Stein on writing, which I can’t praise highly enough.  Between those two gentleman’s work was quite possibly my drive to create comedy because a year later I was on the set of my first film shoot.  That film didn’t work out, but my present project with Cheri Jacobs continues to build towards completion.  It’s called Ollie and Emma and if you haven’t seen that yet, please check us out on one of our social media platforms.

Cheri Jacobs and I 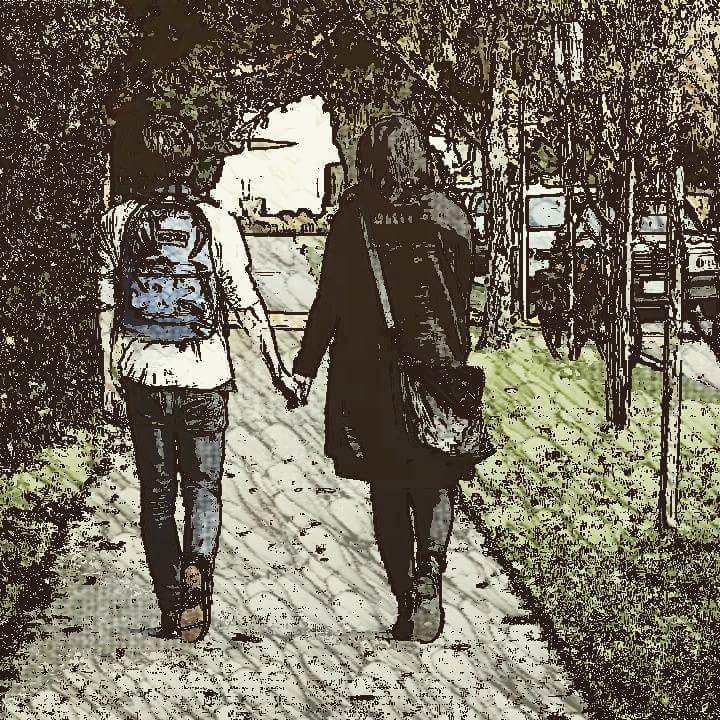 Ollie and Emma - The Series